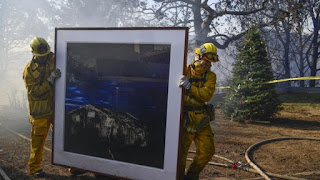 Tens of thousands of Californians fled their homes as wildfires burned a hundred thousand acres driven by hurricane-force winds as Christmas approached.
Around the world, from Europe to Asia, climate change, denied by President Donald Trump, wreaked havoc.
The National Weather Service reported 92 degrees in Los Angeles, the hottest temperature since record-keeping began in 1877.


Guardian
“The return of powerful winds Thursday pushed the destructive Ventura County fire closer to several communities, prompting new evacuations.
“Communities both on the coast and inland were under threat. At 4 a.m., officials closed the 101 Freeway between Routes 126 and 150. According to the California Highway Patrol, that left no open routes between Santa Barbara and Ventura counties. The freeway was reopened around 7 a.m., the Los Angeles Times reported.
In Colorado, with the nation’s highest mean elevation of 6,800 feet (2070 meters), kale, spinach and daffodil were sprouting.
No measureable snow fell in Mile High Denver in November.
Fire crews from Colorado and New Mexico went to the aid of California.
“Researchers from Princeton University and the National Oceanic and Atmospheric Administration (NOAA) report in the journal Nature Climate Change that extreme cyclones that formed in the Arabian Sea for the first time in 2014 are the result of global warming and will likely increase in frequency. Their model showed that the burning of fossil fuels since 1860 would lead to an increase in the destructive storms in the Arabian Sea by 2015, marking one of the first times that modeled projections have synchronized with real observations of storm activity, the researchers said.”
Phys.Org
Long-time Associated Press Correspondent Mort Rosenblum reports: “Olive trees can’t actually talk (and I’m not yet unhinged), but I learn more from them about what matters in the long term than from that fancy Samsung TV blaring away inside my old stone house.
“They tell it straight without sponsors and ratings to worry about, or clueless editors guessing at a distance what their message should be. Having been around since before the Bible was a rough draft, their forte is historical continuum.
“The trees’ immediate grief is the climate chaos that an American president denies. It hasn’t rained in seven months. Olives survived, but not most of the genets – broom – that perfume the hills in summer with delicate golden flowers.”
Mort Report

Posted by Robert Weller at 10:31 AM No comments:

Vigilantes are not the Answer for Massacres 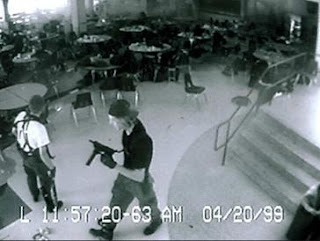 At least two things about guns worth noting in the past week.
Columbine dropped off the list of top 10 massacres, having already more than achieved the overwhelming copycat status predicted that day. I was there. I remember.
Hopes that thousands of concealed carry guns spread throughout the nation would nip massacres in the bud have not panned out.
“The day after former Colorado resident Devin Kelley murdered 26 people at a church in Sutherland Springs, Texas, on Nov.5, filmmaker Michael Moore tweeted that the tragedy has pushed the April 20, 1999, massacre at Columbine High School, the subject of his 2002 Oscar-winning documentary Bowling for Columbine, from the list of America's ten worst mass shootings,” Westword of Denver reported.
President Trump, with loose lips as usual, said the two men who chased the killer at nearly 100 mph had prevented hundreds from being killed. The church doesn’t even hold hundreds!
As is often the case, the killer shot himself before crashing. He had been hit by at least two bullets fired by the civilians.
No vigilante could have even gotten close to the Vegas skyscraper shooter.
In the past, calls for tighter gun control have been opposed by people who claim the laws already exist. Failure to enforce, they say, is the problem.
The latest massacre, in the church, and the one a month earlier in presumably well guarded Las Vegas, suggest law enforcement isn’t the answer either under current laws.
“The gunman who killed more than two dozen people in a small church outside San Antonio on Sunday had a string of troubling episodes in recent years, including an escape from a mental health facility in 2012 after he was caught sneaking guns onto an Air Force base ‘attempting to carry out death threats’ against military superiors, according to a police report,” the Washington Post reported.
The Post said, “Devin P. Kelley’s young life was riddled with warning signs, mounting during and after his time in the Air Force, including a conviction for beating his then-wife and stepson, charges of animal cruelty, mental health concerns, investigations for domestic assault, threats against his family members and a motorcycle crash that left him with lingering physical pain.”
So far, no one is arguing that the answer is for more vigilantes to be involved.
As much as the right to carry a gun Americans demand the right to privacy and free speech.
Most massacres, even back to Columbine, had “warning signs.”
The biggest response has for millions more Americans to get guns. Massacres show no sign of decreasing, according to sites that track them

Posted by Robert Weller at 11:41 AM No comments: 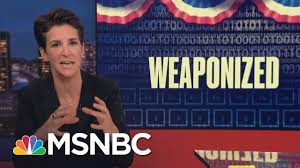 They have tried similar things in other things, though failed in France.

“We are in the midst of a worldwide, internet-based assault on democracy. Scholars at the Oxford Internet Institute have tracked armies of volunteers and bots as they move propaganda across Facebook and Twitter in efforts to undermine trust in democracy or to elect their preferred candidates in the Philippines, India, France, the Netherlands, Britain and elsewhere.
“We now know that agents in Russia are exploiting the powerful Facebook advertising system directly.
In the 21st-century social media information war, faith in democracy is the first casualty.”
Oxford

Sadly for the Russians their currency has declined dramatically. Many lack solid shoes or enough to eat. This often happens under dictators.

Many do not have shoes or enough to eat. Their money has declined in value, as often happens under dictators.

It is hard to imagine how Mark Zuckerburg  could have been convinced to betray his country. Of course more money is always an issue.

His pages full of dog pictures and family were a perfect con.

U.S. laws are so complicated he could end up in federal prison.

As Justice Department special counsel Robert Mueller continues his probe into Russian interference in the 2016 election, including whether Moscow was assisted by any members of Donald Trump’s campaign, Facebook has come under increased scrutiny for the role it played in amplifying Kremlin disinformation. Last week, Facebook confirmed that it unknowingly sold about $100,000 worth of ads to a shady Russian propaganda company seeking to target U.S. voters—a relatively small ad buy that nonetheless could have reached 70 million Facebook users. But Russian efforts to meddle in the 2016 election also went beyond ad impressions, with evidence that Russians sought to organize conservative protests in the U.S. via Facebook. The Daily Beast reported Monday night on the campaign to sow political discord by turning ordinary Americans into weapons in its information war.
Using false identities, Russians used the Facebook event tool to “remotely organize and promote political protests in the U.S., including an August 2016 anti-immigrant, anti-Muslim rally in Idaho,” the Daily Beast reports, and promoted the events with paid ads. “Due to the town of Twin Falls, Idaho, becoming a center of refugee resettlement, which led to the huge upsurge of violence towards American citizens, it is crucial to draw society’s attention to this problem,” the event description for the Idaho rally, sponsored by a group called SecureBorders, read. “We must stop taking in Muslim refugees! We demand open and thorough investigation of all the cases regarding Muslim refugees! All government officials, who are covering up for these criminals, should be fired!” Though 48 people said they were “interested” in attending, only four said they went to City Council Chambers, according to the page, though that doesn’t actually mean anyone showed up. (The rally was held on a Saturday, when the City Council Chamber would have been closed.) The anti-immigrant SecuredBorders group was also responsible for a Trump meme that the president himself actually retweeted last month.
Mueller
“Facebook confirmed to the Daily Beast that the events were promoted with paid advertisements, and that it “shut down several promoted events as part of the takedown we described last week.” Revelations about Russian actors and their potential to have influenced the U.S. political process are leading regulators and officials to reconsider their approach to state-sponsored media organizations like the Kremlin-backed Sputnik. According to a Yahoo report this week, the F.B.I. is now investigating whether Sputnik violated the U.S. Foreign Agents Registration Act by operating as the Kremlin’s undisclosed propaganda arm. Democratic Senator Mark Warner told reporters last week that the laws surrounding digital ads should be more transparent. He also hopes “Facebook, Twitter, and social-media firms” can be brought in to testify at a public hearing.
The latest revelations underscore how Russia was able to take advantage of extremist political rhetoric including anti-immigrant and anti-Muslim sentiment, to whip up discontent in the run-up to the 2016 election, priming Americans for the wave of fake-news stories that inundated social media during the presidential race. As The Wall Street Journal reported last week, the U.S. has become more deeply polarized than ever before over social issues like immigration, religion, race, and gun control. “More than three-quarters of Democrats, but less than one-third of Republicans, said they felt comfortable with societal changes that have made the U.S. more diverse,” the Journal reported. Russian operatives didn’t create those divisions; they just exploited them.”

Posted by Robert Weller at 9:02 AM No comments: 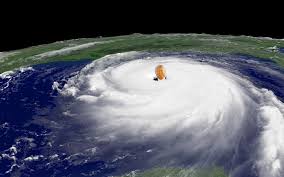 
Amid a series of record hurricanes the head of the EPA, Republican Scott Pruitt, said, “"Here's the issue. To have any kind of focus on the cause and effect of the storm; versus helping people, or actually facing the effect of the storm, is misplaced."
He has been telling his staff to remove information about climate change from its documents.
Logic says the time to investigate problems is immediately after they occur. That is why, for example, when a plane crashes, the FAA sends teams to the scene immediately.
Studies of media coverage of these hurricanes found very little mention of climate change, though it was sometimes possible to read between the lines. When, for example, the talking heads said warmer water intensified storms.
There was one source of attention focused on what mankind is doing to the home planet. And it was not the first time Pope Francis has spoken.
But this time he spoke as lives were lost and homes destroyed.
BBC
The Independent said:
The Pope spoke out as Hurricane Irma has brought strong winds, torrential rains and left millions without power in Florida.
"You can see the effects of climate change and scientists have clearly said what path we have to follow.
“All of us have a responsibility, all of us, small or large, a moral responsibility.
"We have to take it seriously. We can't joke about it. “
The Pope said: “If someone is doubtful that this is true, they should ask scientists. They are very clear. These are not opinions made on the fly. They are very clear. Then each person can decide and history will judge the decisions.”
There was no doubt U.S. President Trump was one of his target for pulling out of the Paris climate accords.

Posted by Robert Weller at 2:05 PM No comments: