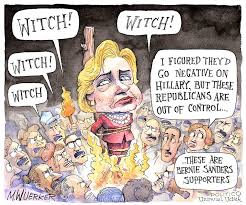 Sen. Bernie Sanders did not win a “big” victory in Washington, Hawaii and Alaska. In fact, he did not win a single primary in those states.
He won their caucuses.
Whether it was a big victory depends on your definition.
Many in the television media insist on reporting he won their “primaries.”
Some got it right.
538 reported the votes were caucuses, something few understand.
“All five of Sanders’s wins this week came in caucuses. The problem for the Sanders campaign is that there are only two caucuses left on the Democratic primary calendar,” 538 reported.
538
Polls show Sanders way behind in New York and Pennsylvania and with nearly a double-digit deficit in California.
After working for more than 35 years around the world for The Associated Press I welcomed getting out of the box and telling the truth.
I couldn’t have been more mistaken.
TV pundits, and some Website moderators, seem to only care about keeping the races going.
Hillary Clinton continues to suffer because of a false story in the New York Times, now recognized as false, that she had let her private email be hacked.
It was very much like the Times’ story that claimed Saddam Hussein had weapons of mass destruction.
Another example of false reporting was the claim that Arizona voters waited past midnight to vote. In fact, 50 percent had voted early. The reason there was a long line was that thousands of independents tried to vote in a closed primary.
Shame on you Rachel Maddow, someone we can almost always trust.

Posted by Robert Weller at 3:33 PM